Late one night this week I decided that I was finally sick enough of looking at our dingy, dirty, orange desk, and staged a full out attack on it armed with a screwdriver, primer and my sander. It was definitely a battle, and I’m not quite sure who won, but after a few bumps and bruises I think I’m in the lead. Pretty sure.

Since the desk is extremely shiny has so many crooks and crannies I thought sanding would have taken way too long, so I used a liquid sander/deglosser to help me out. 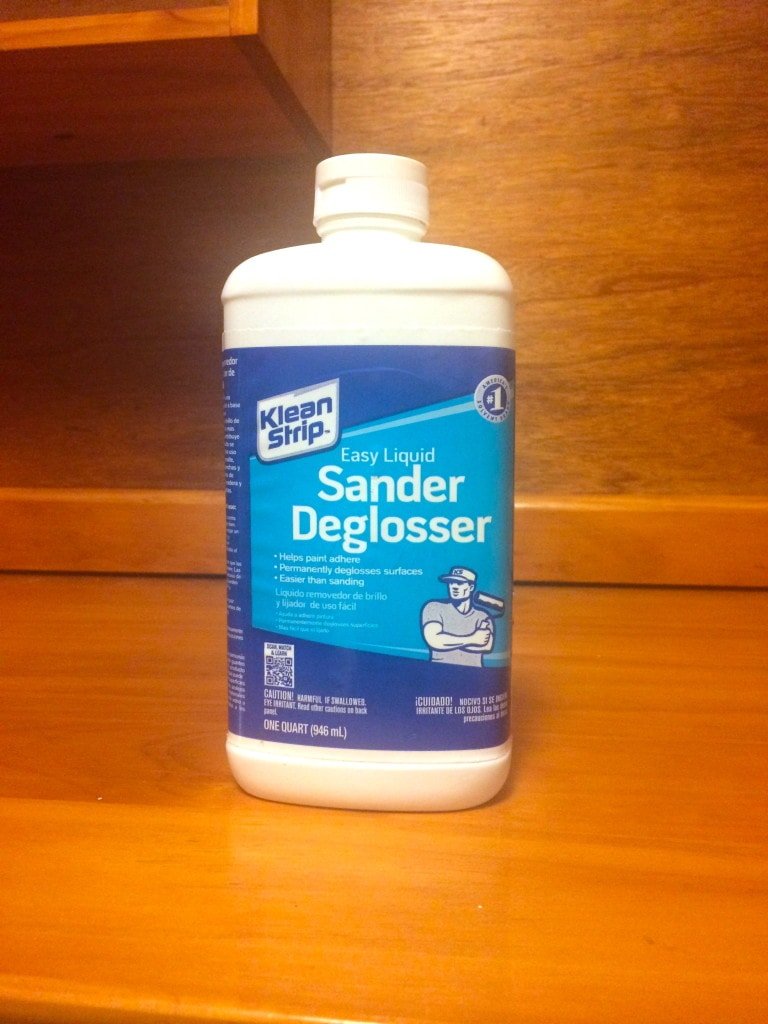 After removing all of the hardware (the new knobs did the trick for a while, but it was time to get a complete overhaul) and doors, I was ready to start! 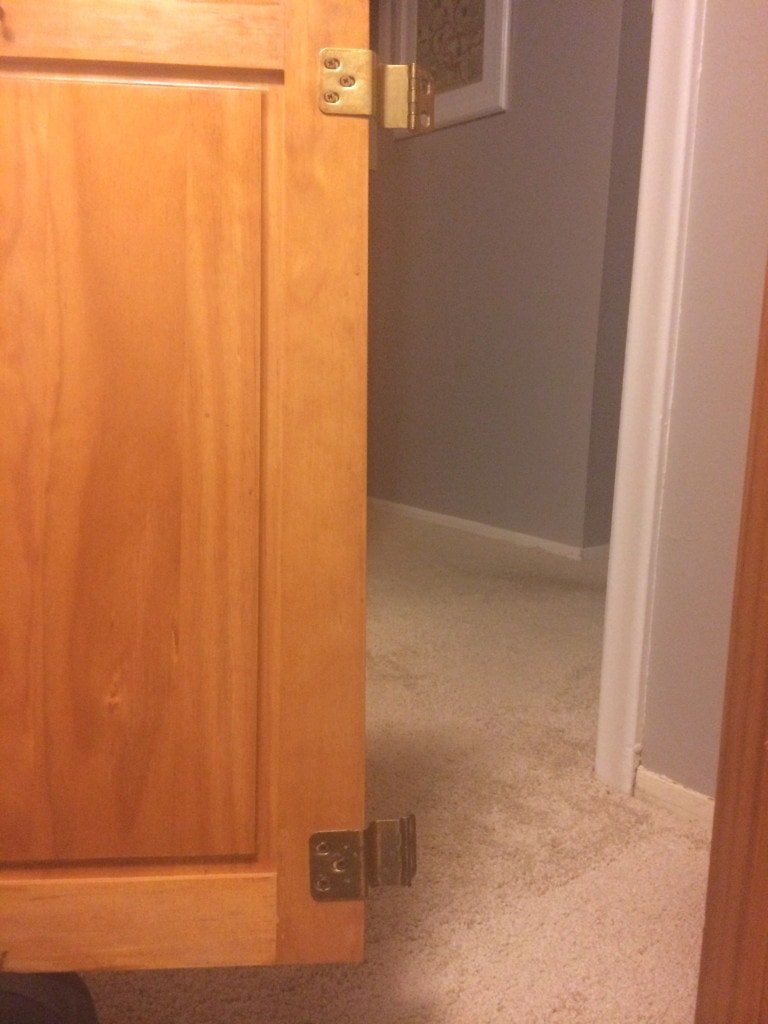 It was very simple, but took a bit of time to remove all of the hinges/screws/knobs on the cabinet door and drawers. After that was done, it was time to test out the liquid sander. Per the directions, I saturated a lint-free cloth and wiped down the areas in a circular motion, refolding the cloth every few swipes to make sure there was no build up. 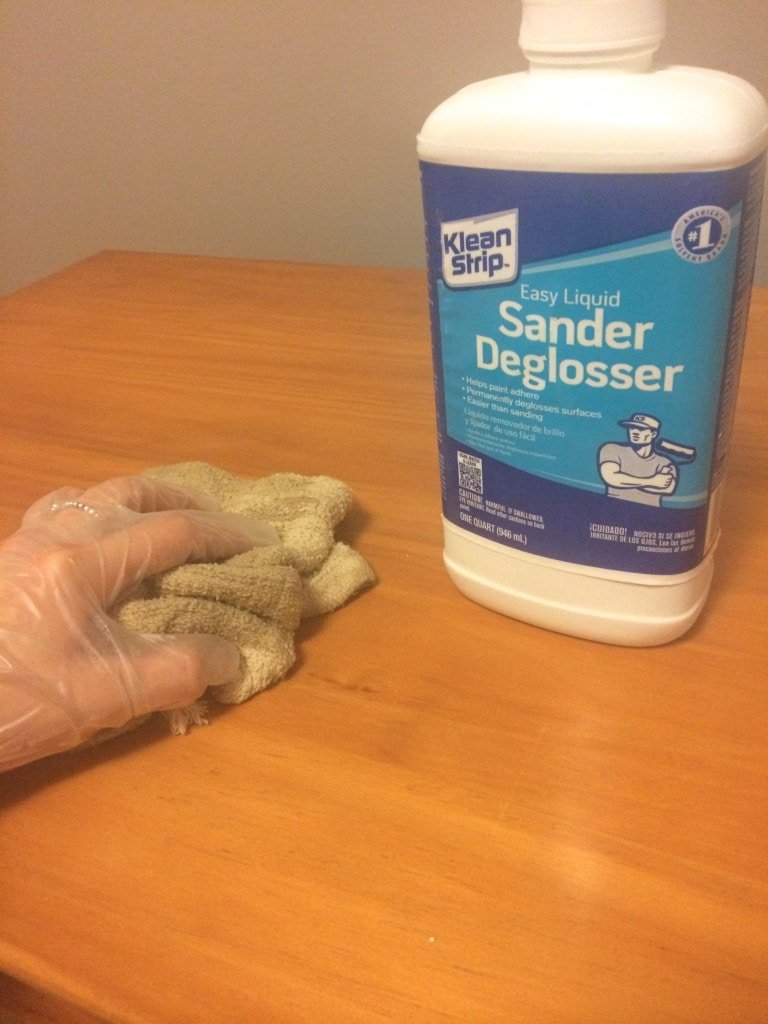 Of course I decided that this project was appropriate to do when it was getting cold out (great timing, not), so I had to do it inside. This desk is also way too heavy for me to lift and I was alone on this night (even better timing, not) so every step had to be done in the actual office. Since this product is a bit strong, I made sure that I cracked the doorwall and window that was in the room, and wore a mask & gloves for protection. The office now looks like an actual battle ground/tornado scene and is a couple feet tall away from hoarder status, but it’s all for the cause. 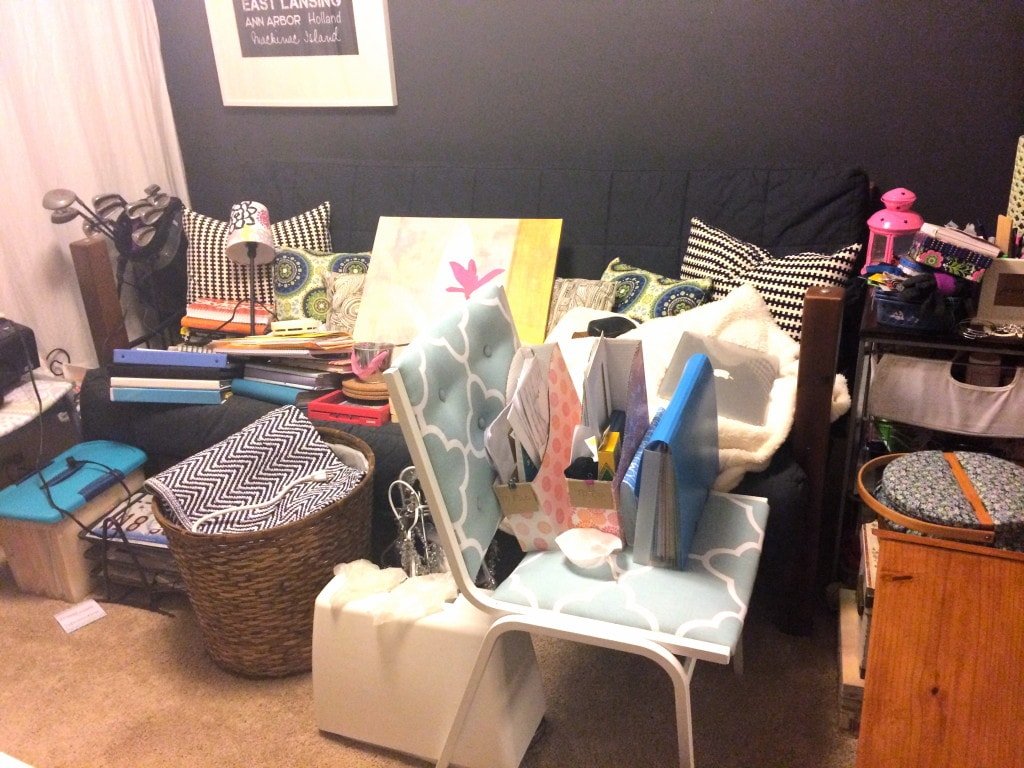 After the liquid deglosser did it’s thing, I went over the top of the desk with my sander, just in case. This part of the desk will get the most action and I wanted to make sure that the primer and paint would have the best chance of bonding.

The next step was actually the hardest step so far- the priming! There were lots of areas to cover, so using a foam brush and roller, I tackled the whole desk and topper in an hour or two. The top of the desk got two coats, again for durability, and the shelf topper being the only thing I could semi-lift, got the boot to the hallway to dry (no comment on how many walls I hit). I chose to live on the wild side and just lay a few bags down to protect the carpet because I couldn’t lift the whole thing to put down a drop cloth- so far, so good. I also just ran to knock on some wood. 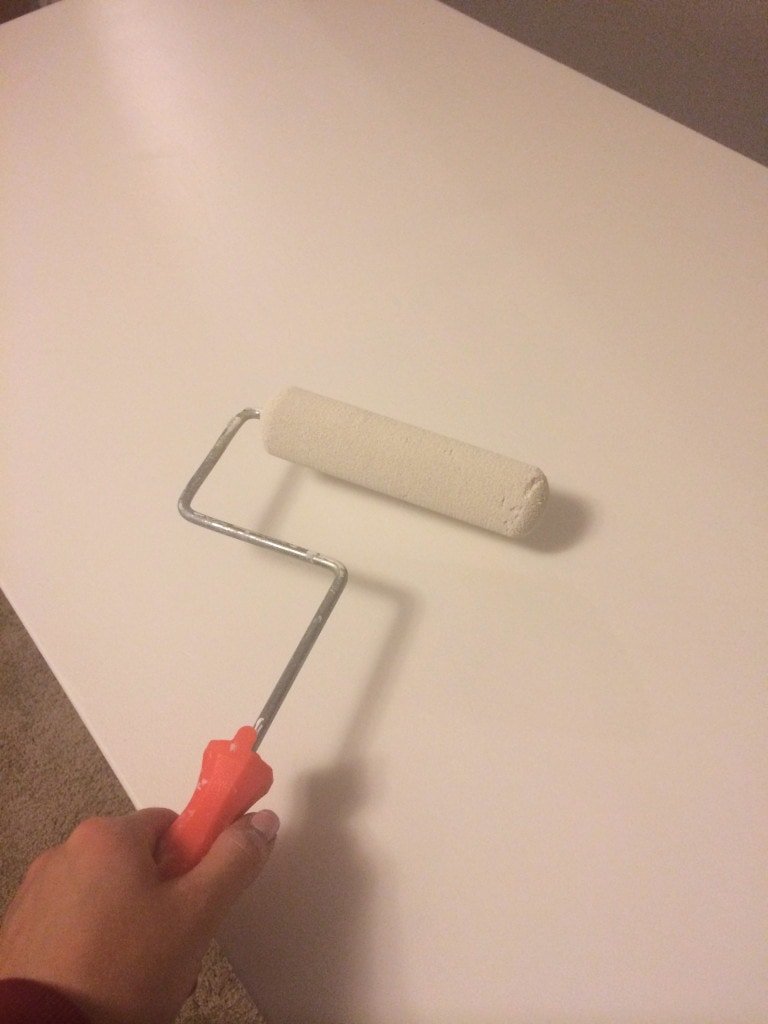 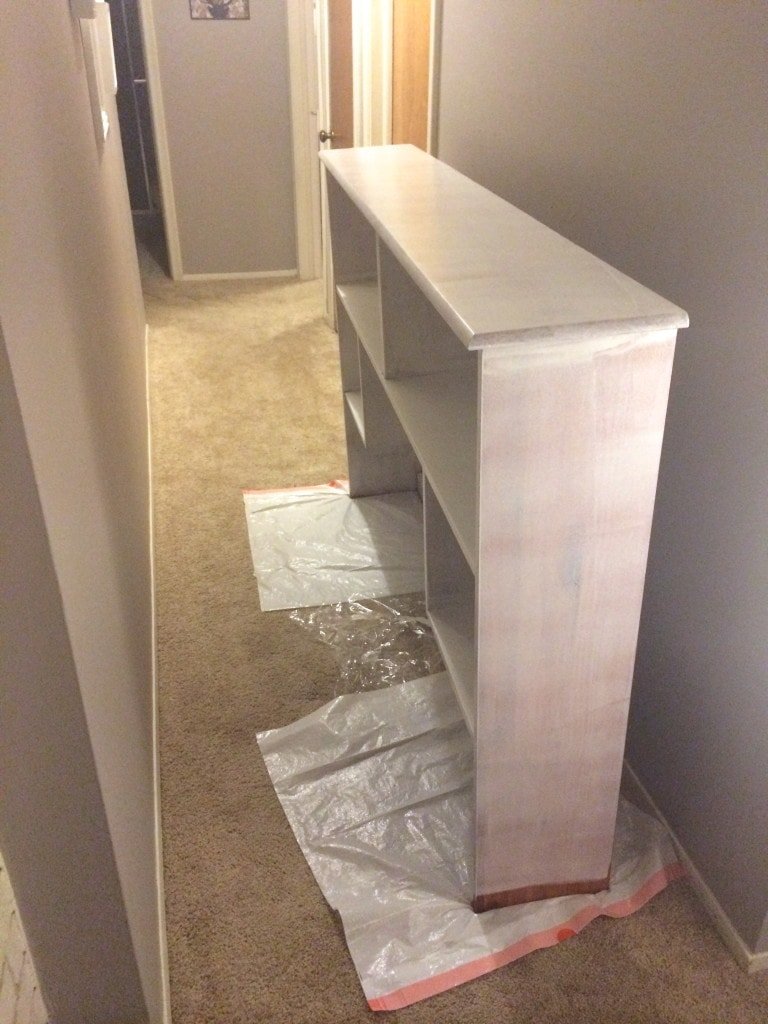 We’ve been purchasing different primers to figure out which one we’re in absolute love with for furniture, so this desk got a nice coat of Zinsser BIN. It took a whole quart to cover, but we’re excited to see how it turns out! 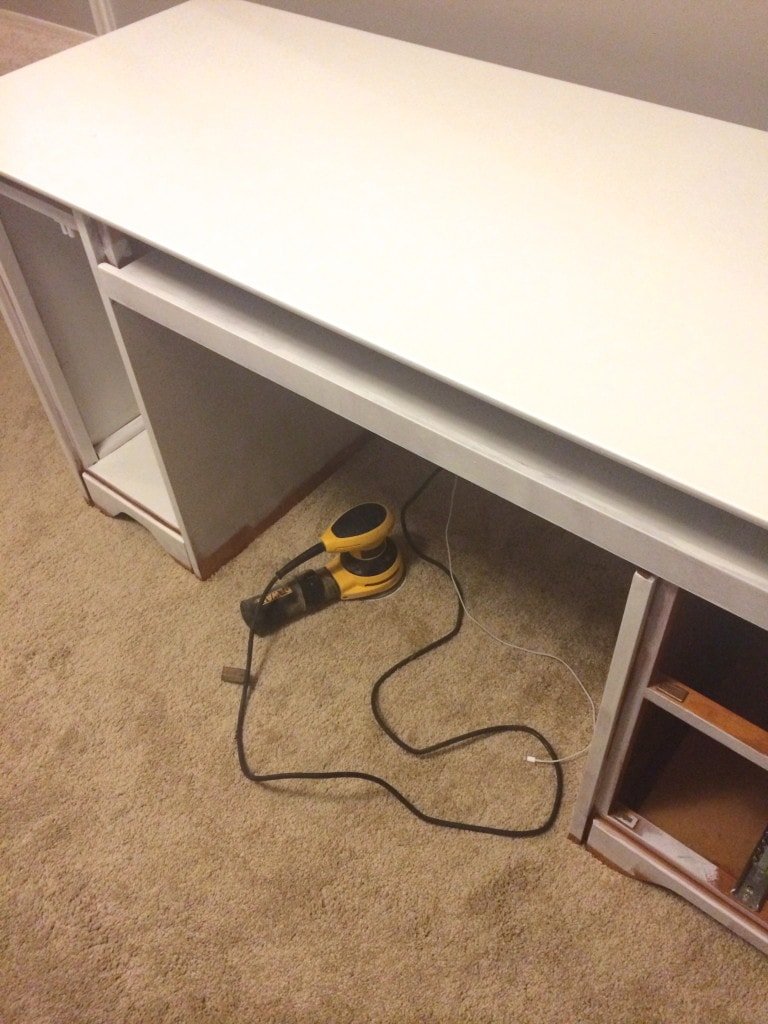 Our plans for the desk are still up in the air right now, but I definitely want the areas that are primed to be a crisp white and then have some fun on the drawer and cabinet fronts. Maybe try out the Annie Sloan Chalk Paint I finally just picked up? I’m debating getting new hardware since I think something more classic like the pulls on Paige’s bedroom closet would be very pretty, but I’m still looking around! At the very least the hinges are getting some spray paint treatment.

I also think it would be fun to have some sort of design on the backs of the bookshelves. Maybe something removable like this so I can change it later on? I could remove the particle board and have it open, but it’s kind of nice to have it blocked in (less things fall). So many options!

Now to wait for the primer to cure for 7 days… Hope no one needs to use the hallway : )